The goal of the project was to predict the angles that create the main structure (backbone) of the protein, given information about its aminoacid sequence.

Predicting proteins’ tertiary structure from their primary structure is one of the most important unsolved problems of biochemistry. Current methods are inaccurate and expensive. Machine Learning offers new toolset that promises cheaper and much more efficient solutions. One of the recent breakthroughs is Mohammed AlQuraishi’s paper on End-to-end differentiable learning of protein structure, which together with RaptorX-Angle, inspired this project.

The model was developed for a course but the results go beyond the regular scope of the class.

We use ProteinNet dataset as introduced by AlQuraishi and write the entire data processing pipeline in Tensorflow. The heart of the model is a Convolutional Neural Network, similar to the one introduced in RaptorX. The model is trained using ADAM optimizer on an MSE and MAE losses between predicted and true dihedral (torsional) angles. The LSTM from the image below is thus replaced with a CNN and we don't implement the pink part that would convert the angles into a 3-dimensional, Euclidean space. 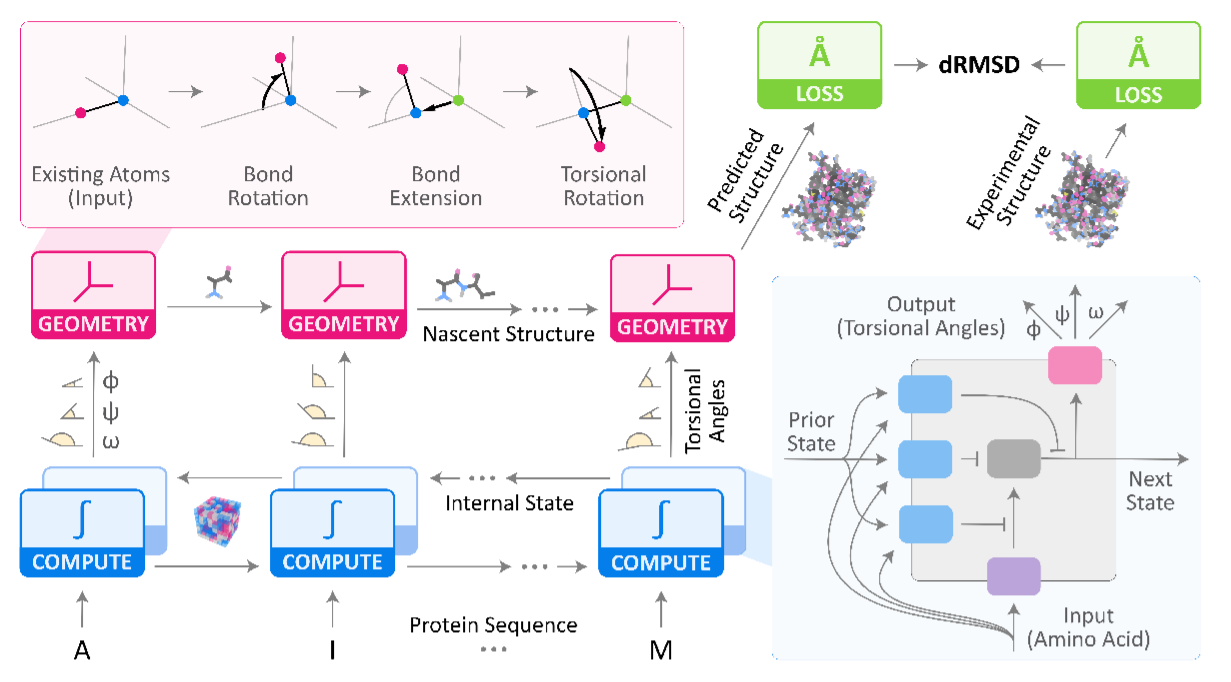 The main challenge in going from a sequence of letters representing amino acids to a 3-dimensional protein structure is 1) an efficient loss calculation and 2) output of the network being angular.

The model developed in this project achieved results on par with results reported in RaptorX while using a smaller feature space. The final report can be found here.

I used Tensorflow to load the data from files saved in the tensor format, prepared a que-based pipeline and a fully differentiable graph that first converts Euclidean coordinates of the protein atoms into its corresponding dihedral angles and then minimizes the loss between angles predicted by the core model and the true angles in the training dataset. I experimented with many ways of angularizing the output of the model and developed a clean, modular code available on GitHub.