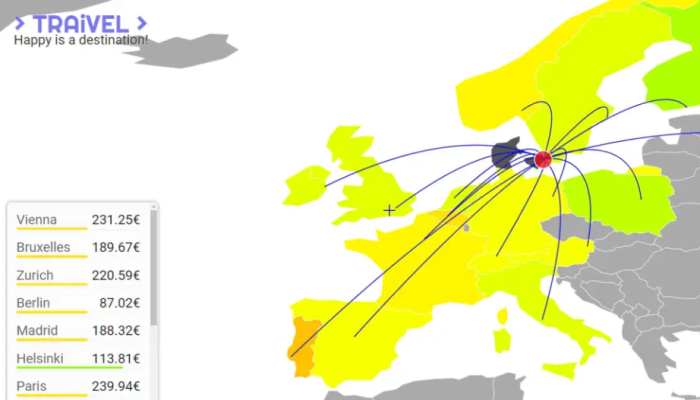 The project was built in around 24 hours in a team of 4 for a hackathon. Won a Skyscanner prize. The goal is to provide users with travel recommendations based on their current location and approximated happiness in the considered European countries.

The happiness is based on Twitter data scrapped for these countries and filtered to only consider native speakers. That is being sent to Microsoft Cognitive Services that provide sentiment analysis in many European languages (thus the choice of countries). In parallel, we request Skyscanner to provide actionable recommendation that can take he user directly to Skyscanner, where the tickets can be bought.

Everything is visualized in a form of interactive map that could be adapted to many other data sources than just sentiment information.

The project was divided into 4 areas and developed in parallel by 4 people to later be integrated into one application: A) Twitter API integration, B) Microsoft Cognitive Services integration, C) Skyscanner API integration D) Main backend and frontend of the app.

For the backend we’ve used Flask to provide us with as much flexibility in that short time frame as possible and for the frontend we’ve used a library providing the map functionality.

The separate services have not been integrated together during the hackathon – the app operated on real data but it was statically saved for the purpose of the demo.

I was the author of the idea, designed data flow, guided team’s efforts, so that our separate paths meet, and built the main backend and frontend that integrated all the information.